I was browsing a Montreal indian market on Victoria Avenue in Côte-des-Neiges, trying to get some turmeric, curry leaves and Toor Dal. We had been out of turmeric for a couple days at home and we had forgotten to get it at the grocery store.

I couldn’t find a small bottle of turmeric in the store, so I asked around and was told the indian name for the spice was “Holdi”. I got back to the spice section and there I saw it. A bag of almost a kilo of turmeric for 3.29$. I reminded myself that I paid around 4$ the last time for a standard McCormick spice bottle at my grocery store and it hit me.

Supply and Demand, those are the words ! 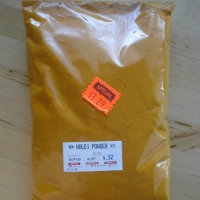 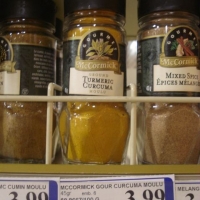 Victoria Avenue is the most multiethnic street in Montreal. Every possible ethnic group is represented on a 2km stretch between Queen Mary and Jean-Talon West. The store where I got the bulk turmeric caters to the needs of the neighborhood’s diverse population. Demand there is very high for the important spices (turmeric, cumin, curry leaves, green chilis, coriander, mustard seed, etc) used in both Indian and West-Indies cuisine.

Deux-Montagnes has a 95% caucasian population and is a suburb to Montreal and Laval. The local IGA grocery store caters to people whose knowledge of Indian cuisine is mostly that of restaurants in Montreal (for those who actually know what it is altogether). Turmeric is always plentiful because the stock never goes down. Even curry powder practically never runs out while steak spice mixes and “italian spice” are very popular.

Effect of demand on price

Since the Marché Victoria store is an indian community food hub, demand is very high for all specialized items which are hard to find elsewhere for the local Indian ethnic groups. Prices are driven down because the necessities of daily cooking are an incentive to purchase a lot of these spices regularly.

Conversely, the Deux-Montagnes IGA sells turmeric as an exotic item with associated high price tag because it is seldom purchased. People generally do not know much use for turmeric except for its coloring properties in the few North-American recipes calling for it. As such, it is normal that the price conveys the exotism of the ingredient.

The grocery store spice is 30x more expensive for the same product than the bulk spice bought at the ethnic market. Food for thought.

Next time you don’t know what to do with turmeric, make dal ! It’s a tasty dish of lentils full of protein. Here’s a link to a recipe for yellow dal on the Route 79 blog.