Recently I had to implement the Canny edge detection algorithm in my Digital Image Processing class at ETS. I had seen the algorithm in use in some of our vision software for the SONIA Project, but I had never actually looked into the details of it until now.

Of course, edge extraction is not a trivial matter and there are no magical answers. There are several degrees of freedom in the parameters of the edge detector that determine which “edges” will be extracted from a given image. 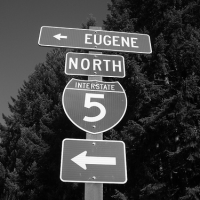 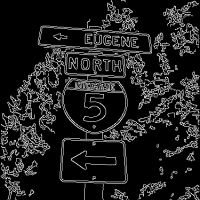 Over the course of my implementation, I found several excellent resources which have helped me understand the algorithm. The two better ones are both from image processing lecture notes:

My initial implementation of the algorithm was done in MATLAB using the Image Processing Toolbox. I used this version of the algorithm to generate two movies showing the steps of the algorithm visually (see bottom of this post for the movies). They were generated by saving frames and creating a batch file with ImageMagick command invokations to add captions. The individual frames were then compiled into movies using VirtualDub.

After creating the MatrixF class, I implemented the Canny algorithm, as well as a contour segmentation algorithm using it. The result is in Canny.java.

The Canny algorithm implements the following steps in order:

Using all Float operations and no in-place processing of matrices, the speed gain is still about 16x between the Java version and the MATLAB version, which is significant 🙂 My version of hysteresis thresholding uses a processing list instead of straight recursion, to maximise efficiency and prevent stack overflows (thanks to Jean-François Im for the tips about that).

The example movies showing all steps of the Canny algorithm on two sample images are shown below. You can access the full resolution AVI files from the vimeo entries.

If you want to understand the Canny algorithm better, I encourage you to check-out the two references mentionned above and to try implementing the algorithm from scratch. There is a lot to be learned about image processing from this classic algorithm.